If you’re looking for a place to fry your eggs, I’ve never seen anywhere cleaner,

Than the buttered up Italian scalp of Pierluigi Collina!

I’m famous. I am in fame. Infamous.

Last week I mentioned that I had just been approached by my employers to go on live TV on the BBC. The BBC as the home of all that’s right and proper in UK society are legally bound to ask for both sides on any debate and that includes the use of fur.

After accepting my new position as national hate-figure I was told to expect a call that evening to have a chinwag with the producer. Simultaneously I was trying to cook dinner and was struggling with the desire to divest myself of a past meal. Via poop.

Eventually this desire overwhelmed me and I sprinted to the commode for a time-efficient session. I had just settled into the business at hand when…

Eventually I did get on the phone and once they had asked me a few background questions paid me the most gruel-thin complement I’ve ever received.

I had been aiming for the voice of a robotic chicken sandwich, so I fairly screwed that up.

As blasé as I may have been able to pretend to be about it the evening before, I had a night that was completely devoid of sleep. Zero sleep. Some sleep? Aren’t you listening you fool. NO SLEEP.

Nothing like 8 hours of lightless silent rumination to really… calm yeh down.

The next day I needed more than a few minutes to get it together. Meg had identified the right train for me to take into London and told me when I would need to leave to make it. Fifteen minutes after this time she walked into the livingroom and there found me looking confusedly out the window with my shirt untucked.

Still managing to make it well before the allotted time, I was ushered into the 3rd level basement, which I’m pretty sure is where Dante stowed adulterers and people with a poor sense of airplane armrest boundaries. As it happens it was also the Newsnight studio, where Paxo spent years squeezing the necks of politicians as a cruel and unusual sport while the nation yucked it up. All great for my nerves.

Paxo. He’s never met you, but he thinks you’re a dumdum.

The show was the Victoria Derbyshire programme, a mid-morning current affairs and debate show with an average viewership of 950,000. A missed opportunty for plugging the blog if ever there was one. I was preceded by a Baroness who when taking time off from the lyrics of a Queen song, was announcing a new maternity policy in the National Health Service and she was talking with a member of the public whose child had died as a result of failings this new policy was designed to address.

After Baroness Cumberlege CBE DL DSG (her full title, I kid you zero amount) tottered off I was ushered out to the side stage with my opponent who was a semi-nude protestor at London Fashion Week for People for the Ethical Treatment of Animals (otherwise known as PETA).

Having seen how the set was basically tiny and felt as much like one of the many crummy theatre spaces and venues I have done plays/gigs in, I started to feel more and more relaxed. Chatting to my opponent, also led me to suspect she might not have been the intellectual heavyweight I had argued against in my head instead of sleeping for 8 hours the previous night.

Trying to move conversation to an even territory, I asked what she thought of the UK potentially leaving the EU. “I don’t know what that’s all about. My boyfriend told me something about it.”

So we were asked out and though I do say so myself, things went pretty well for your darling narrator.

Pictured: My not a normal job.

The whole thing lasted about 10 minutes and from the accounts of others I came off the more knowledgeable of the two of us, didn’t get flustered with any of her attacks and even managed to land a few barbed zingers e.g.

“Veganism is still only representative of 1% of the UK.”

“But it’s always on the rise!

Those watching from work seemed chuffed enough with my performance (I still work there at the very least) and I sauntered out with a strange sense of anti-climax back into the bustle of London’s Regent’s Street.

Little did I know that the Twittersphere was aflame at the audacity of a person to say a succession of factual things in a non-emotive fashion. 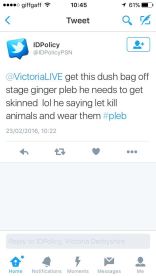 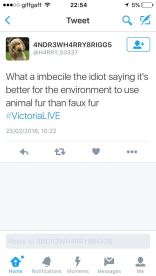 Twitter, where morons go to eat their own word vomit.

If you’re having trouble seeing the small text in the image above the full list of names I was called included:

It was also suggested that I should be skinned alive, boiled alive and have my face turned into a bag. Assuedly while alive. Very charitable sorts.

I grant that some of you may find this perhaps a little shocking, but this is not the first nor shall it be the last hate-mail/threat-bucket I receive for working where I work. Sadly this is a worryingly mundane practice online, with little practical recourse and not much critical consideration of the correctness of one’s own position. I’m not going to prosletise to you here about my occupation or the ethical mechanics that I might use to validate it, but… I’ve never threatened to cut someone’s face off.

In other news wedding planning is going great. Meg and I have been discussing room allocations for the wedding (still more than a year out), but Meg didn’t feel I had taken a full enough part in it. I pointed out that we had in fact been discussing it at length for an hour.

“IT’S PART OF THE FUN DICKWAD!”

Then we agreed I was wrong and the wedding ledger with Napolean-like strategy notes got a little bit thicker.

I’m gonna cut your face off.